As we welcome advancements in technology, media and beauty, we can't forget about ideas and trends that have withstood the test of time. In the 80's, 90's and 00's, black TV sitcoms were being produced at a rate double that of today, and simultaneously, creating hot hair trends just as fast. We're paying homage to the sitcoms that gave us lessons to learn and styles to emulate. Whether through hair or fashion, we can all pinpoint which sitcoms and characters had the largest impact on our swag and personalities. Three shows in particular celebrated the diversity of blackness in a fresh and lively way that truly made a difference.

This is part one in a three part series. First up, we take a look at the lavish hairstyles of black 80s sitcoms.

THE FRESH PRINCE OF BEL-AIR

Luxury and style perfectly describe the women of *Fresh Prince, *a show where a Philly native starts a new life in Bel Air, CA. The Fresh Prince gave us a refreshing spin on the African-American experience in the 90s. Through their fashion and hairstyles, the ladies of the family walked the tightrope between cultural awareness and high, economic status. 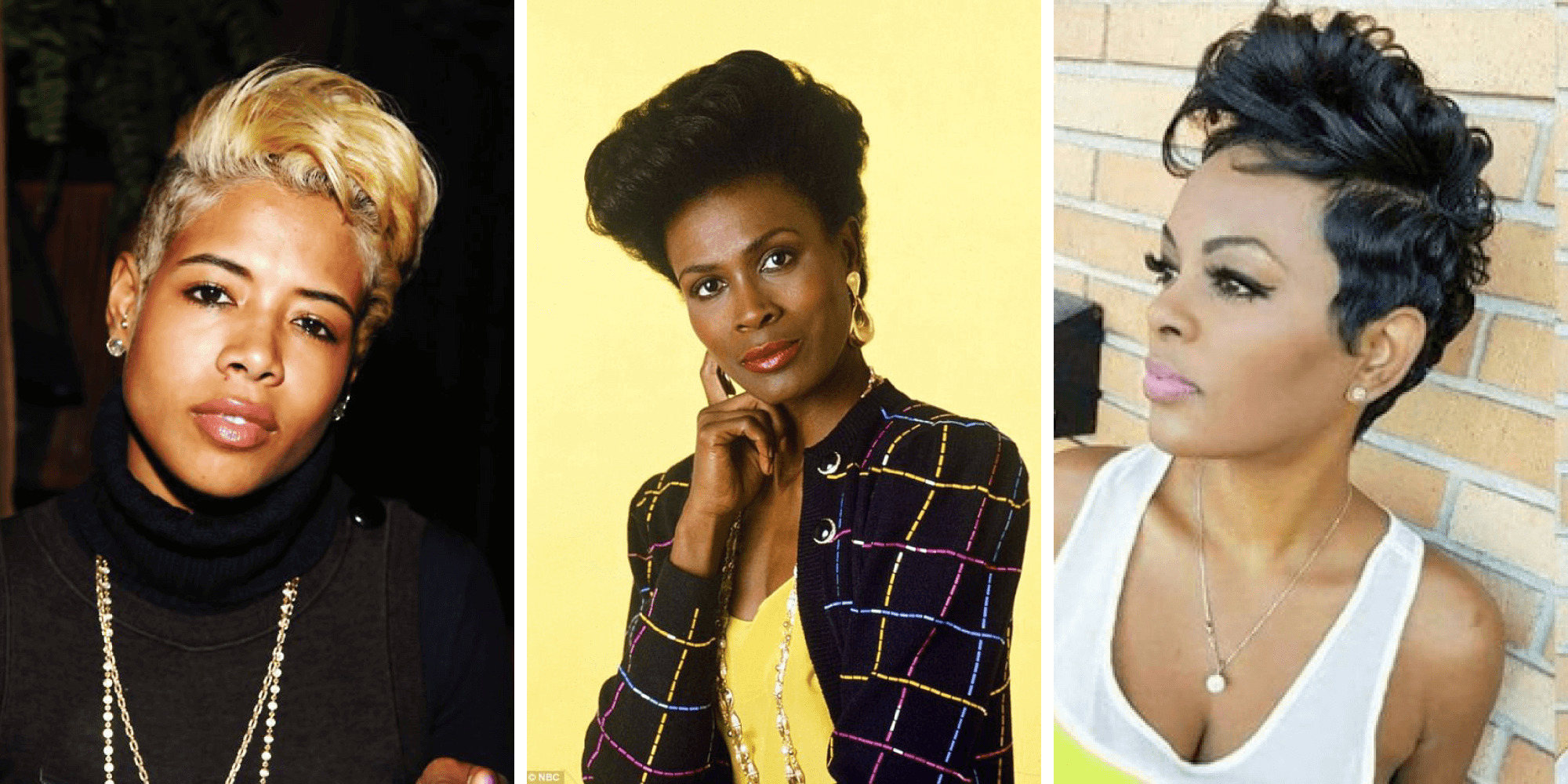 Both Aunt Vivs, at different points of their roles, rocked all-over curls on a shoulder length cut. Or, the style specific to Jane Hubert, the short, sleek edged cut with volume at the top. This look can also be seen on artists like Kelis in the early 2000s. Short hair continues to trend among black women as a bold and fashionable look. Whether permed or natural, you too can achieve this look with your own setting foam, rollers or a small curling iron. 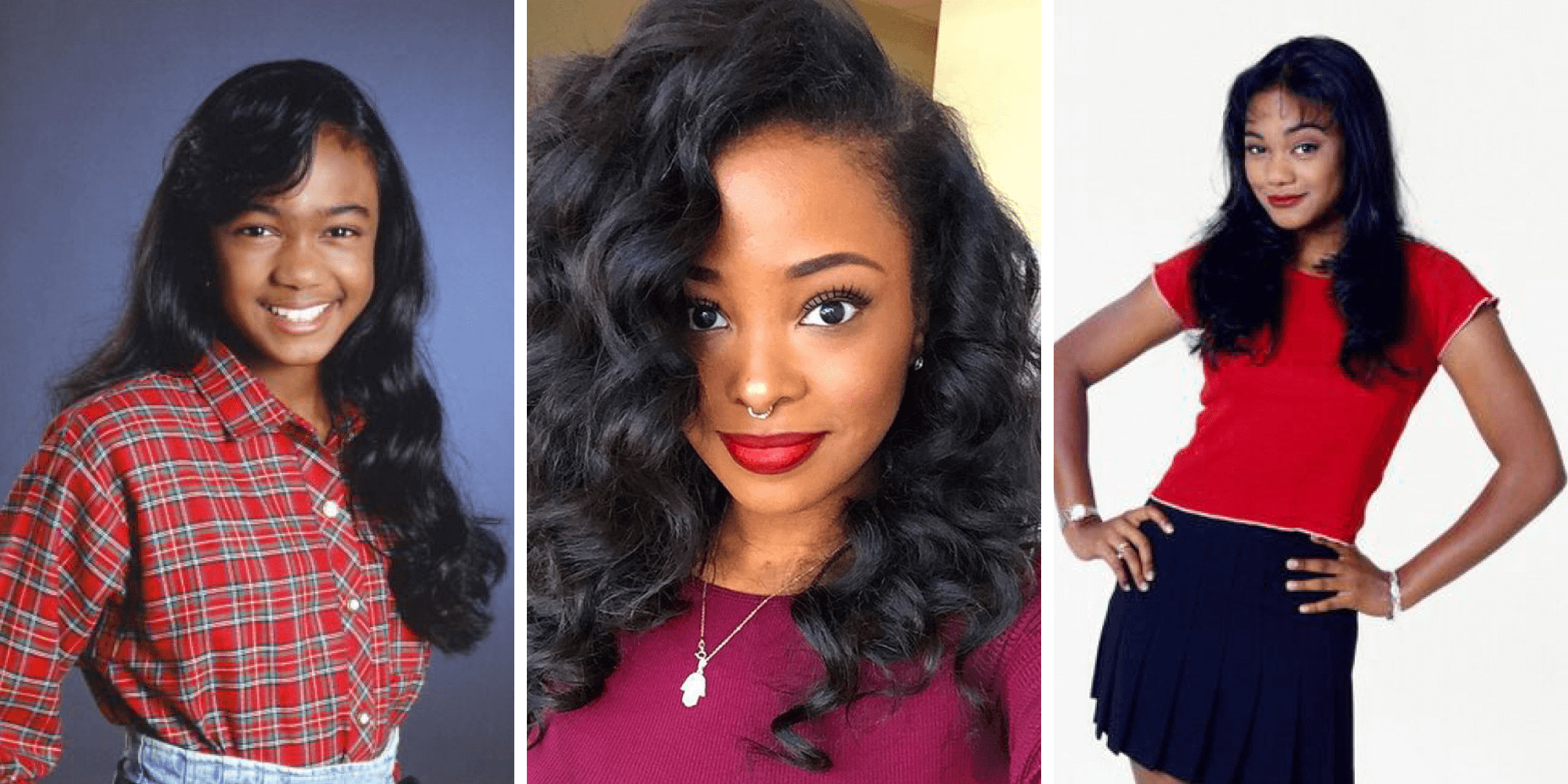 Ashley often wore her hair natural: in a braid-out style paired with curled bangs. She was the book smart school girl in the midst of developing her own identity. Her love for hip hop music and culture transformed her look over time which inspired different hairstyles throughout the seasons. This long, body wave style is still popular among black women today often worn in casual and formal settings. Play with your part and add a little more volume with extra bundles of teased roots. 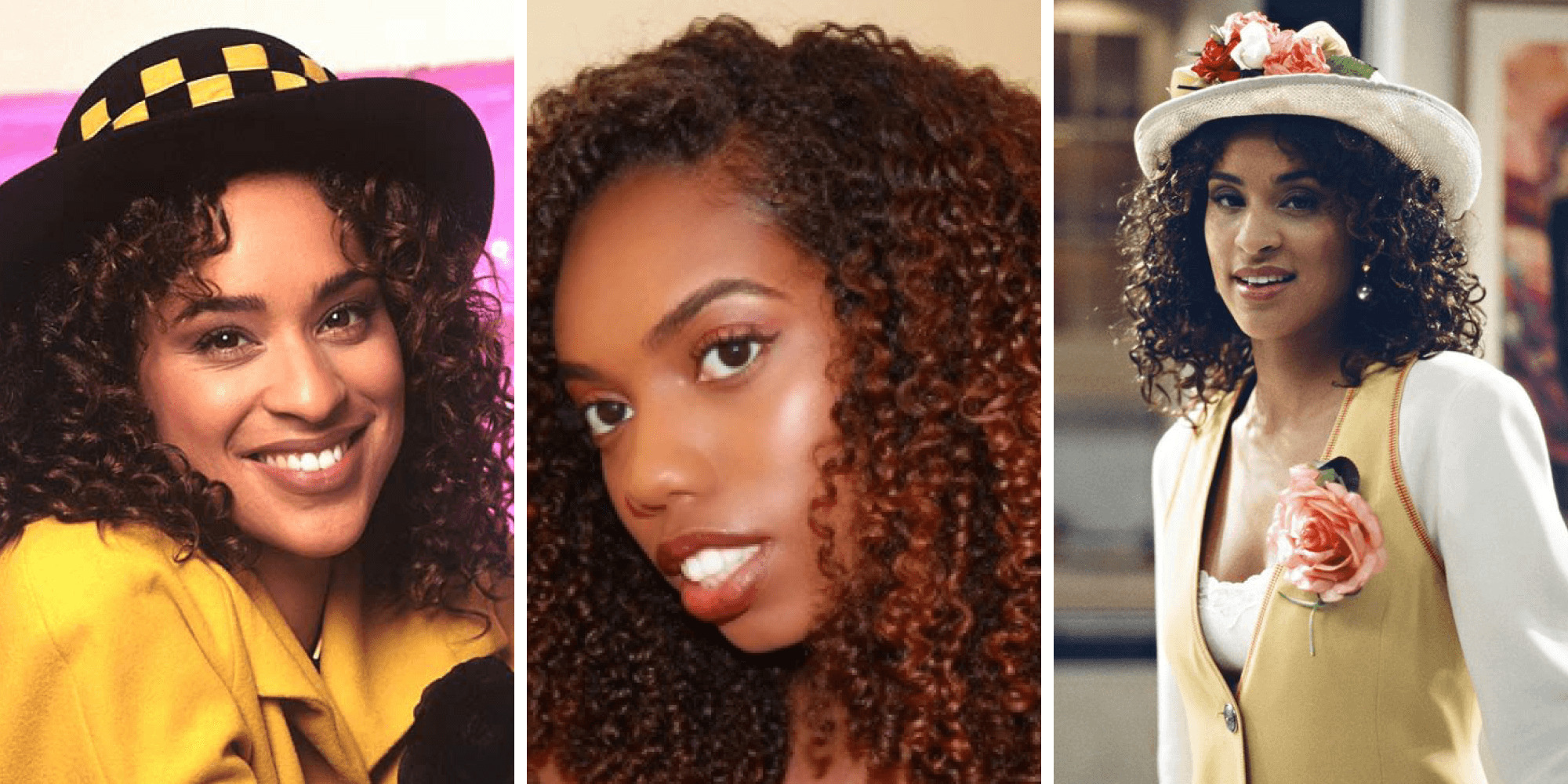 Big sister Hillary wore her natural, dark brown curls often topped with big hats that matched the pattern of her dress. This wash’n’go look can be achieved with a twist out or by simply adding oil and leave-in-conditioner to your own locks, depending upon your texture. Naturalistas have established their own corner of the hair market as more and more women begin to embrace their curl patterns.

Showcasing the depth of black culture was a theme in the 90’s. A Different World was a pinnacle show in that sense. It presented viewers  with a group of friends pursuing higher education at a historically Black university, and it reflected an array of common struggles experienced by people throughout the diaspora. Six characters in particular come to mind when I think of the strong black women who taught us that they were not above hard work or embracing their roots. 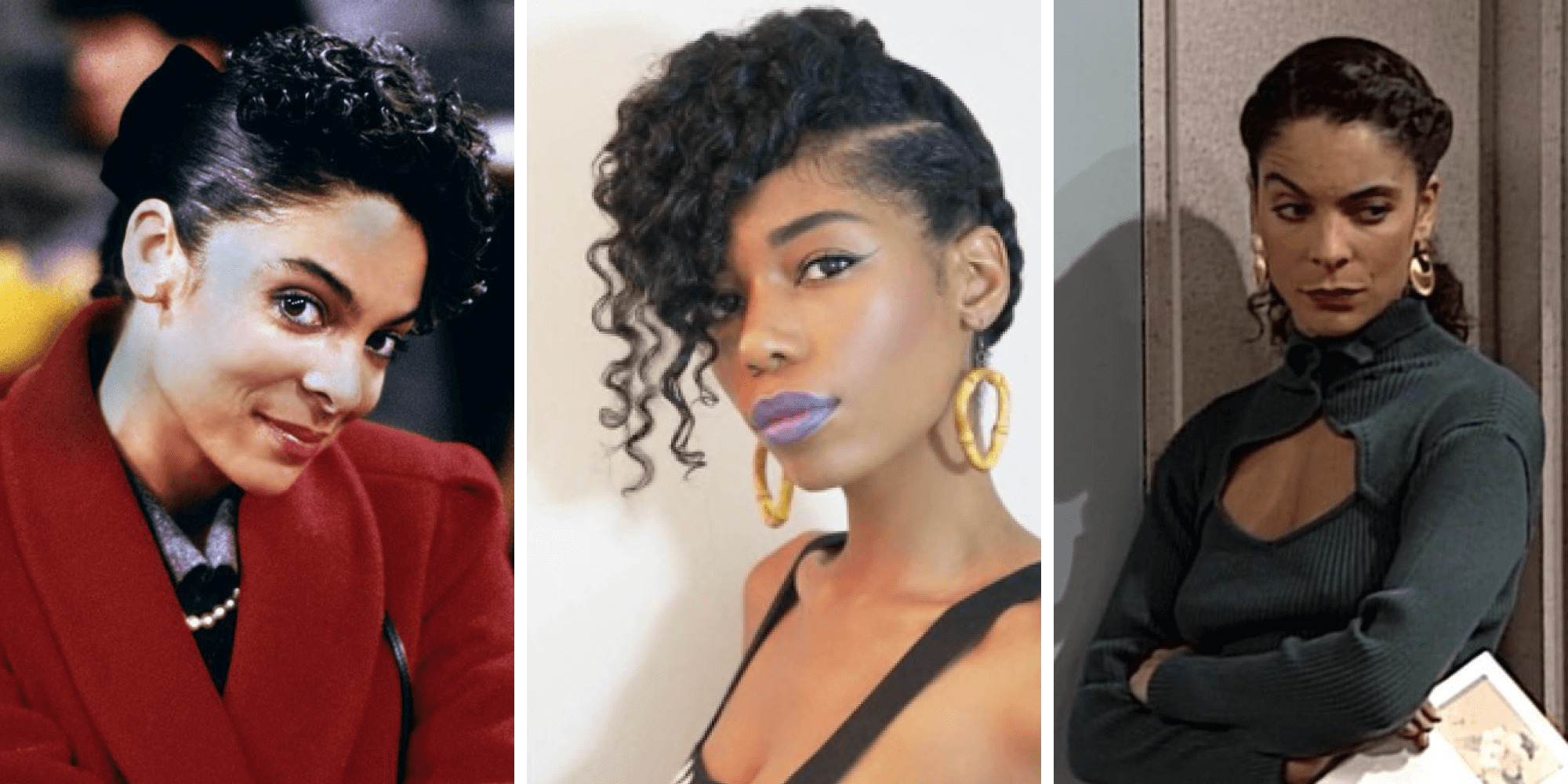 While she seemed materialistic, Whitley was always true to herself. She saw every occasion as an opportunity to be the best dressed - even if it meant showing up to class in a fur and pearls. Whitley’s character often wore a half up, half down style where her curls hung loose and free. She also captured the versatility of  updos whether it was with a sleek ponytail and curly side bangs or twisted edges that folded into a bun. Similar to that of Hillary Banks, Whitley’s wash’n’go styles can be repurposed by applying oil, leave-in-conditioner and alcohol-free gel to your overnight twist outs or naturally curly tresses. 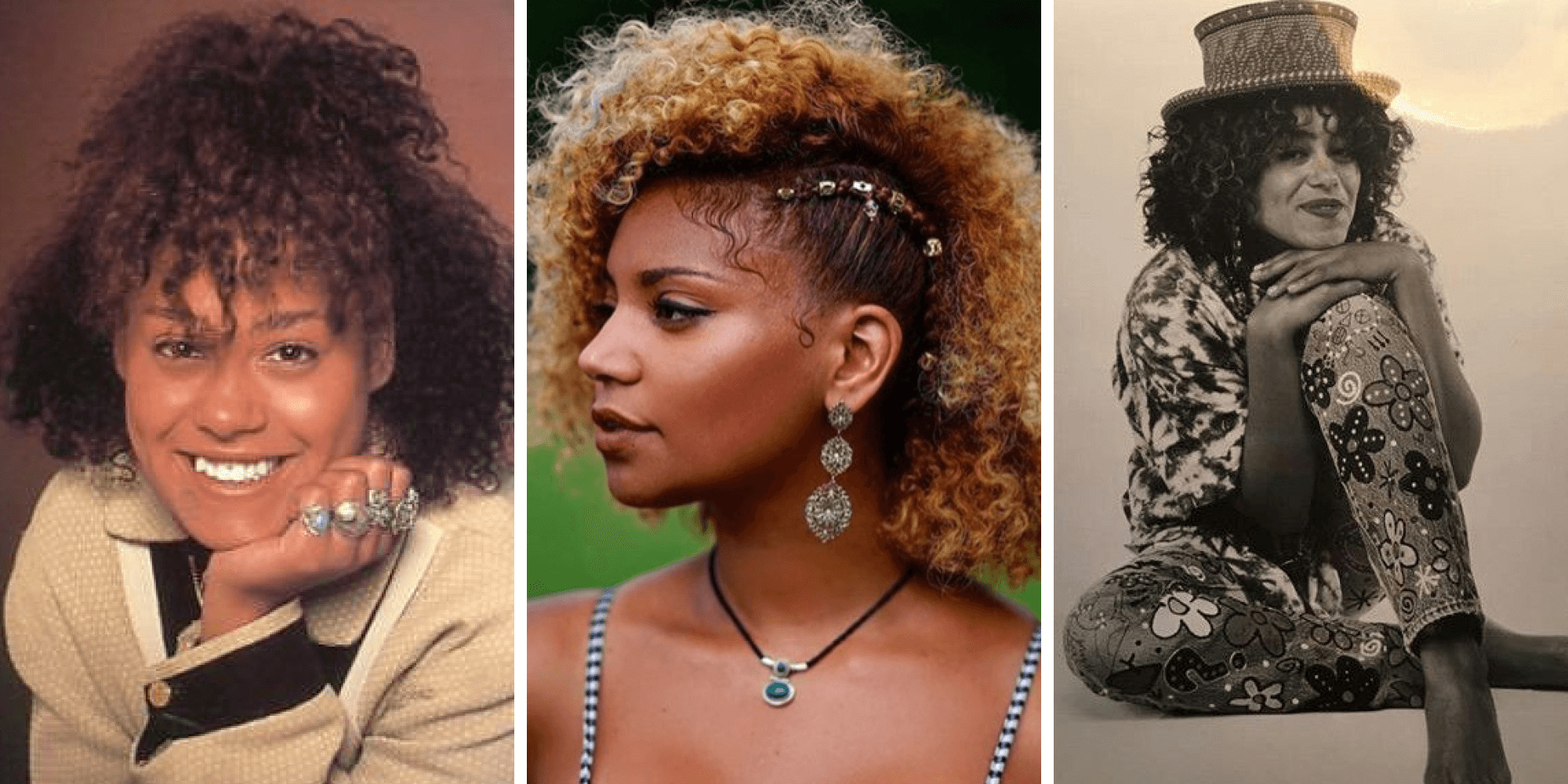 Freddie also rocked her hair in a natural style: sometimes half up half down and other times under big hats and headwraps. Her character cared immensely about the environment and  also  held the ideals of Black power and inclusive feminism close. She set the tone for many of us - Not only in her politics, but in her style. She wore her Afro-inspired hip hop swag with baggy pants, printed overalls, and african garb. Today’s modern version of the look is seen in all the beaded and jeweled adornment women are incorporating into their protective styles 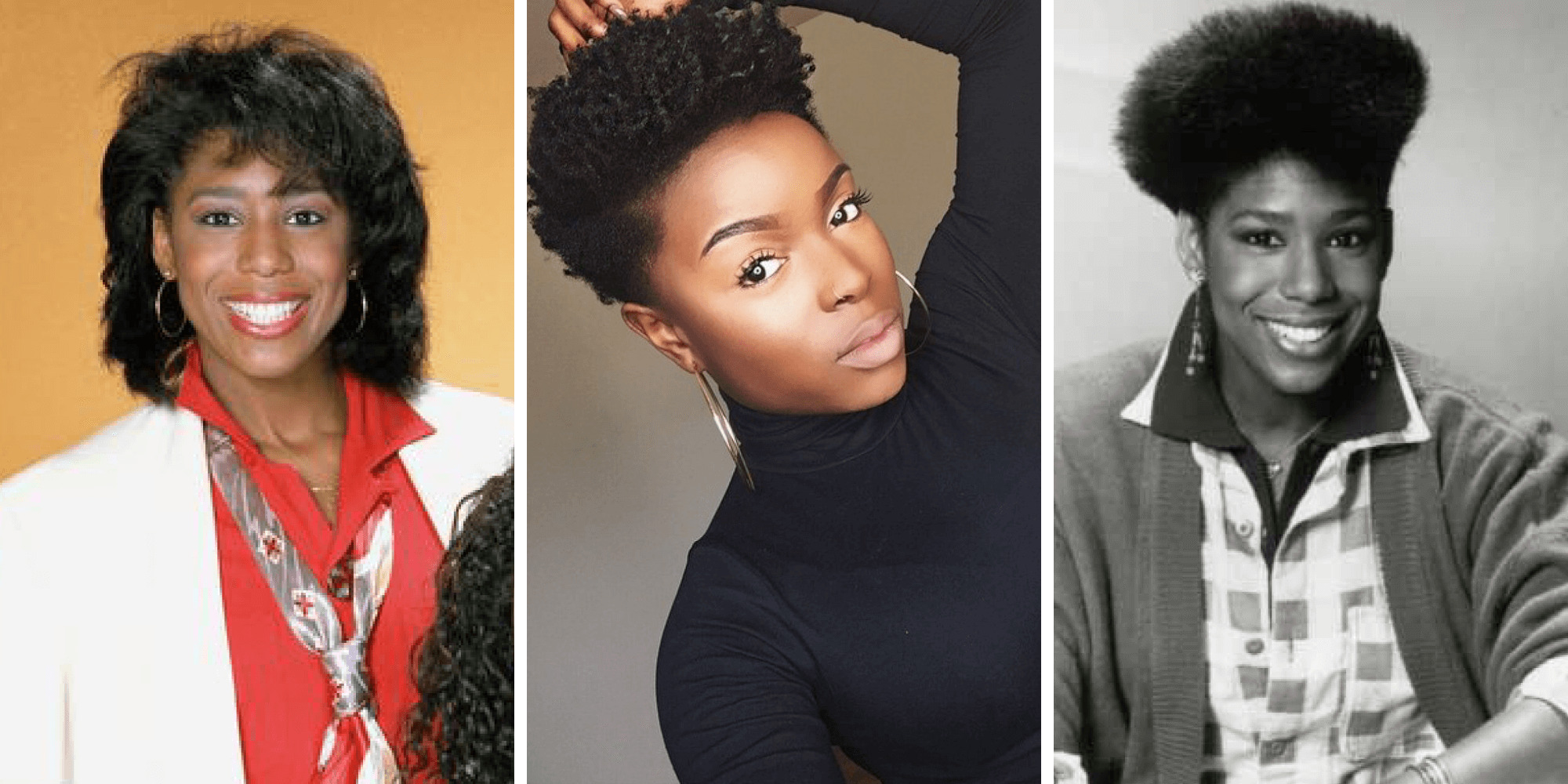 Exhibiting strength and talent, Jaleesa studied hard and, sometimes, partied even harder. She was driven, beautiful, and often motivated her friends to reach for the sky. Her motherly instincts, dance skills, book and street smarts made her a standout character in the sitcom wearing styles that also impacted the black hair community. Jaleesa commanded respect in both a curled press and asymmetrical blowout. Her hairstyles are still trending today, putting new spins on classic looks.

The classically beautiful Denise joins the natural hair girls with a hairdo that slowly transformed as she became more comfortable in her character. Denise began to twist her hair in preparation for dreadlocks which later became a signature part of her look. Faux locs have become all the rage, transforming the way we’re used to seeing and developing dreadlocks. However you rock your locks, adding beads and gold ropes can be a festive touch for a special event or just for fun. 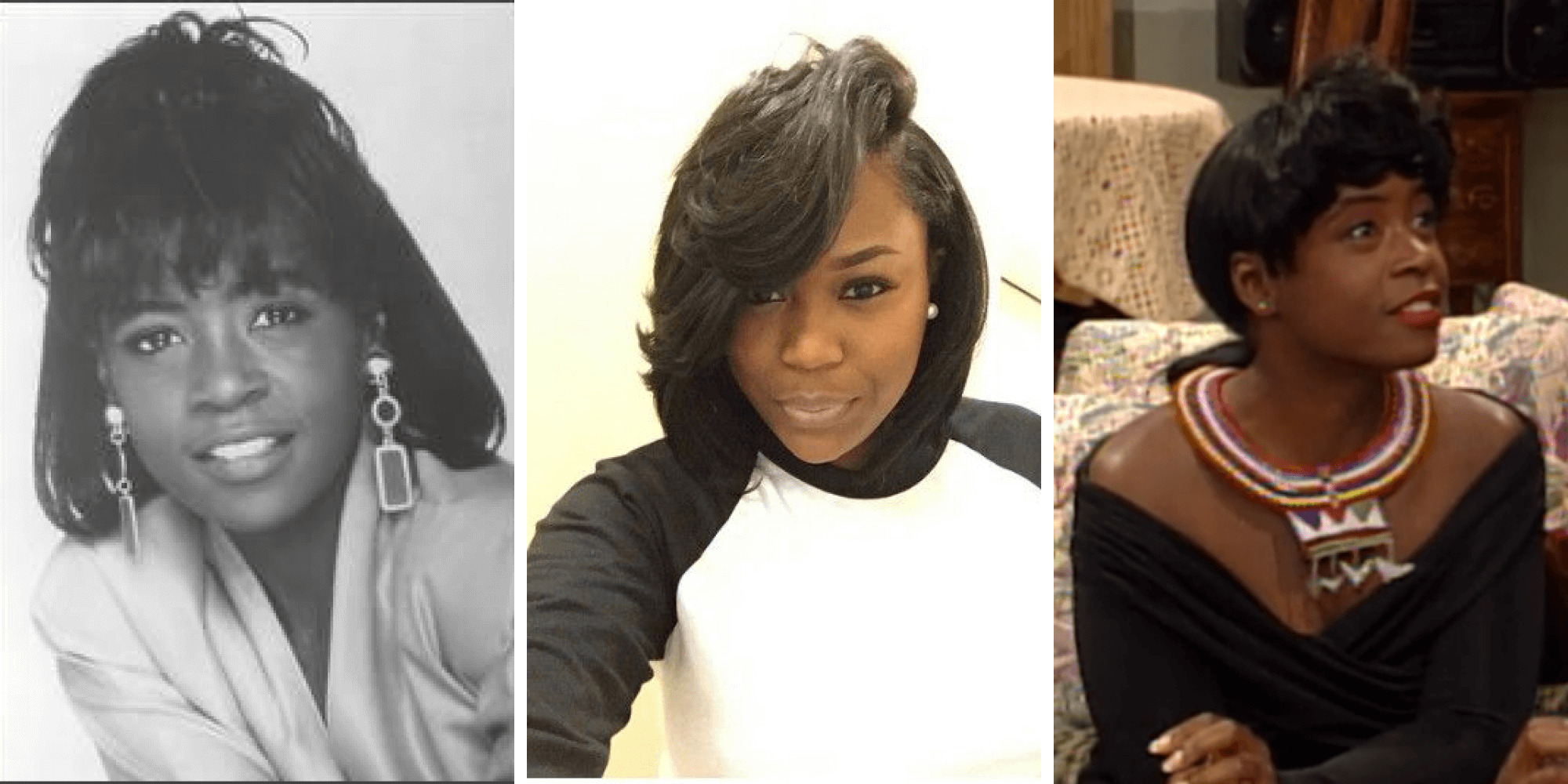 Kimberly wore  short, press and curls with feathered bangs that framed her face perfectly. She was the wise one of the group that had her heart set on medical school and worked shifts in the school cafe. Her incredible voice, dedication to her career,and big heart made her the girl-next-door character that we all wanted to befriend. With feathered bangs and big jewelry, she celebrated her lineage, worked hard and played harder. If you’re looking to try out this cut without using heat, feel free to consider wigs or a layered sew-in style.

Last, but certainly not least, the characters of Living Single were living large in New York with successful careers and impeccable style. The 90’s were a time to celebrate our African roots in combination with our own unique flare. f Living Single did just that in Kente cloth, headwraps, dreadlocks with a ton of modern touches. 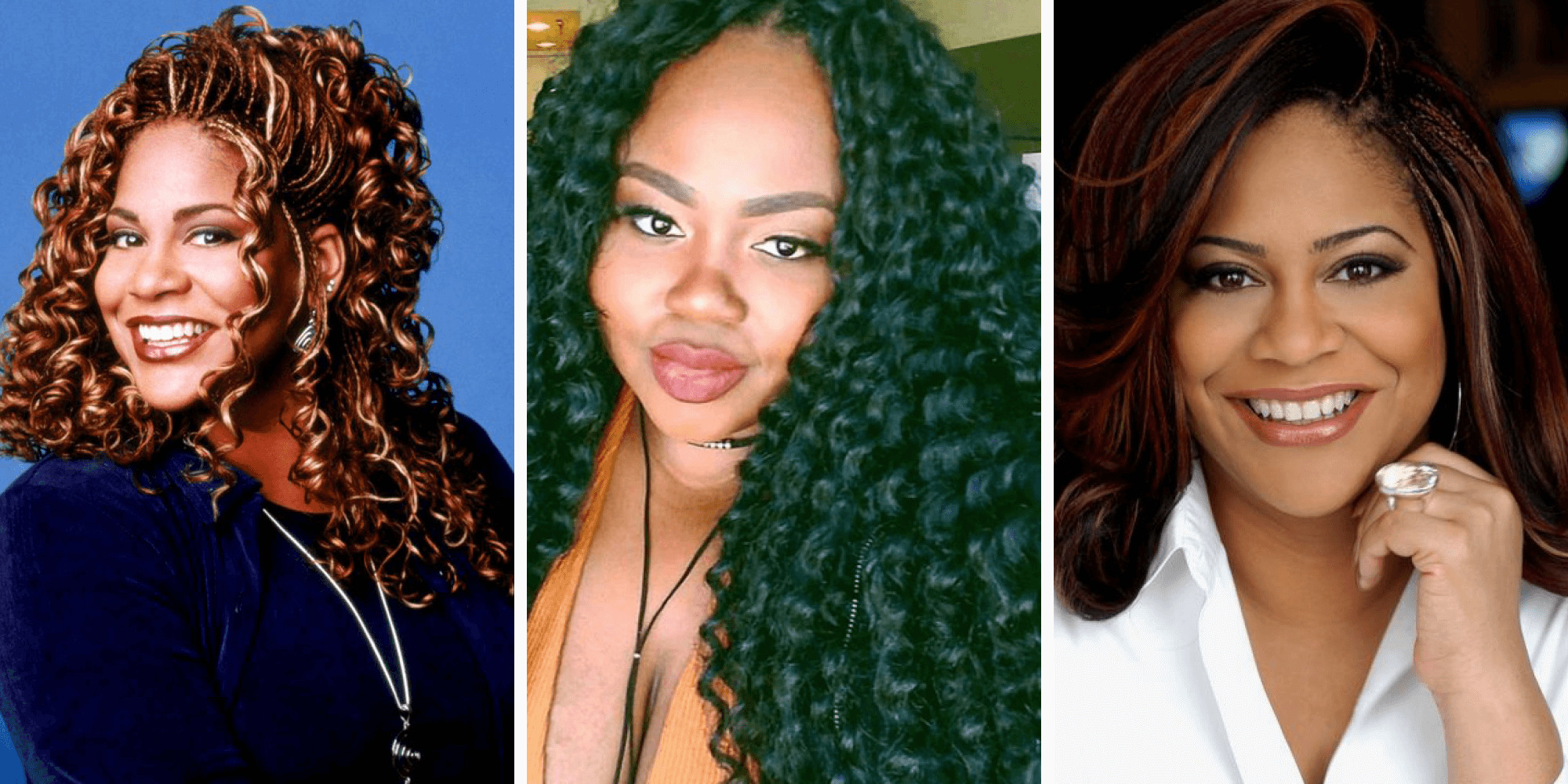 Sinclair made simplicity beautiful in breezy casual wear that was effortlessly comfortable. Her braided updos and flips were iconic in showing that braids offer lots of opportunity for styling. Braids remain a staple of the black hair community with poetic justice braids andcornrows as holy grail protective styles. With a pack of braid extensions, you can install with the crochet method or put rollers in your braided set of individuals. Explore the braids section at your local hair supply for more looks! 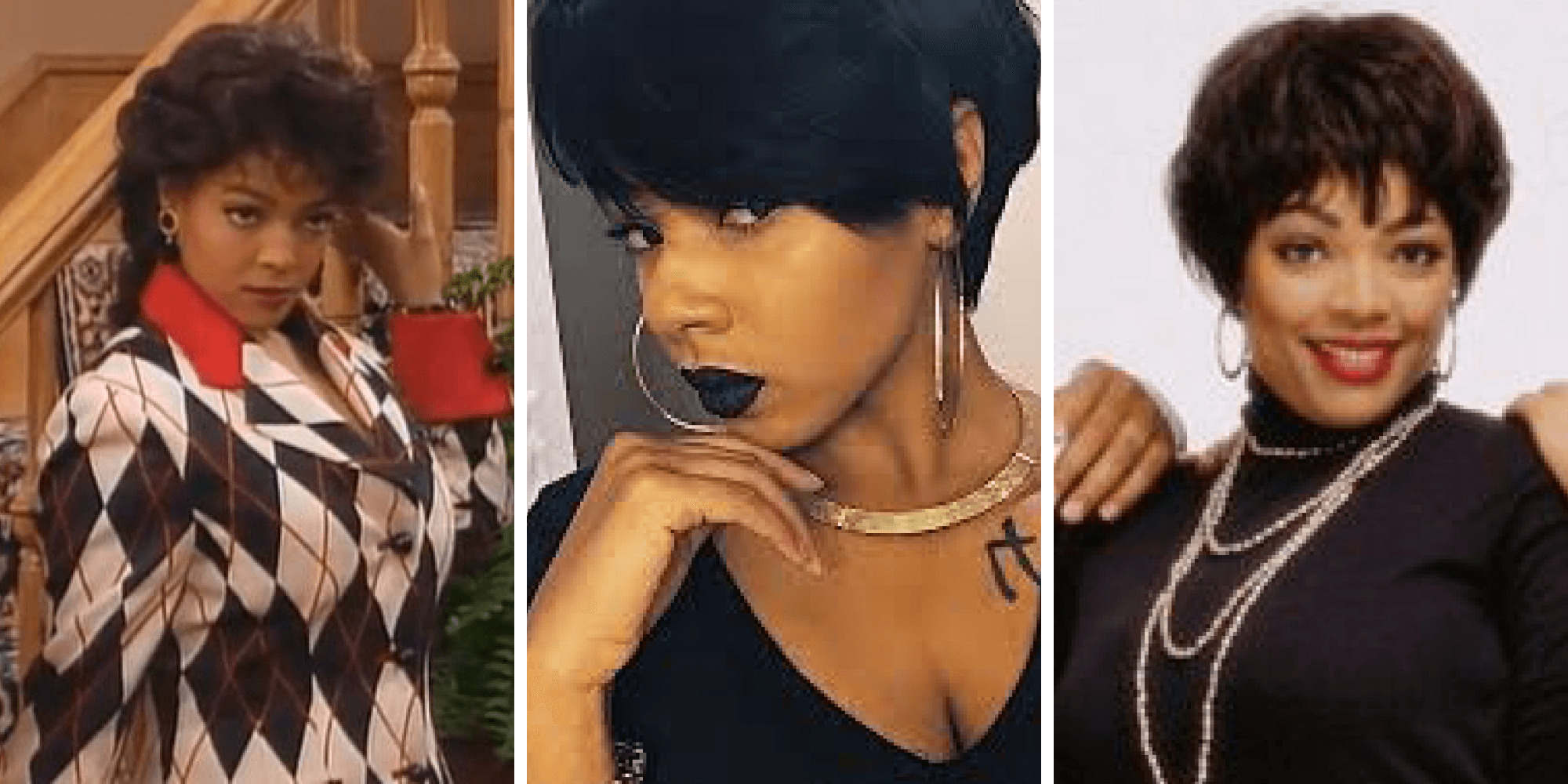 Speaking of looks, Regine gave us a LEWK with every opportunity. Her iconic wigs and lavish taste made for a very entertaining experience. If it wasn’t known before, her character was a testament tothe versatility that wigs provide black women and the fearlessness that comes with trying new hairstyles. Regine loved a good short wig/hairdo that put her face and style on display. Feeling bold? Get playful with your lock length and cut off some inches for this pixie-esque do. Or check out the short hair wig options with online distributors. 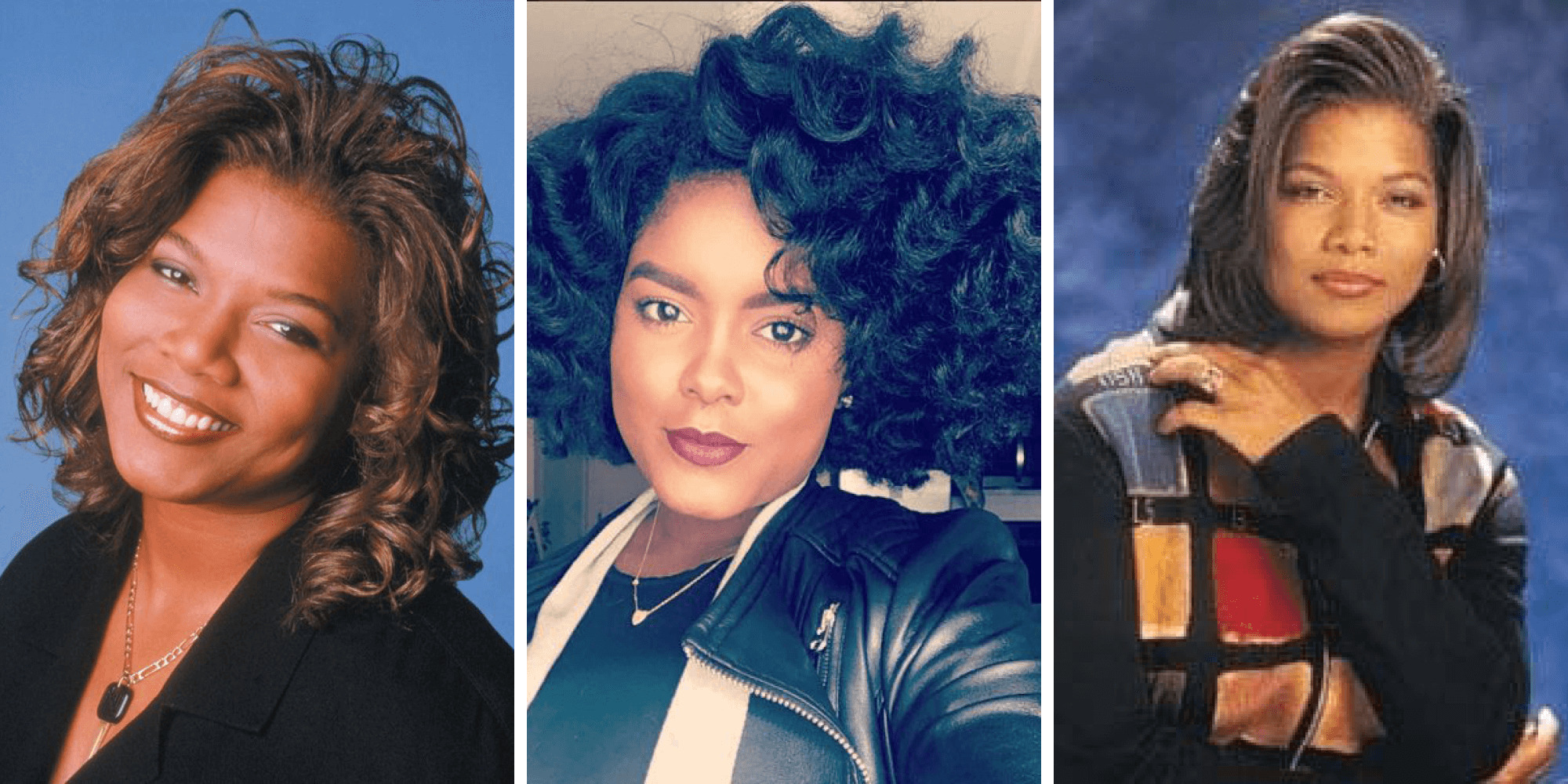 The press and curl styles of Queen Khadijah, the star of the hit sitcom, were iconic. She gave us curls and textured waterfalls embracing all of the iconic 90’s styles that black women wore and loved. Her sandy brown hair color was her signature before she decided to go blonde in her later movies and appearances. While her curls were most likely created with a curling iron, you can apply a wand curl to your blow dried locks and achieve these bouncy curls. 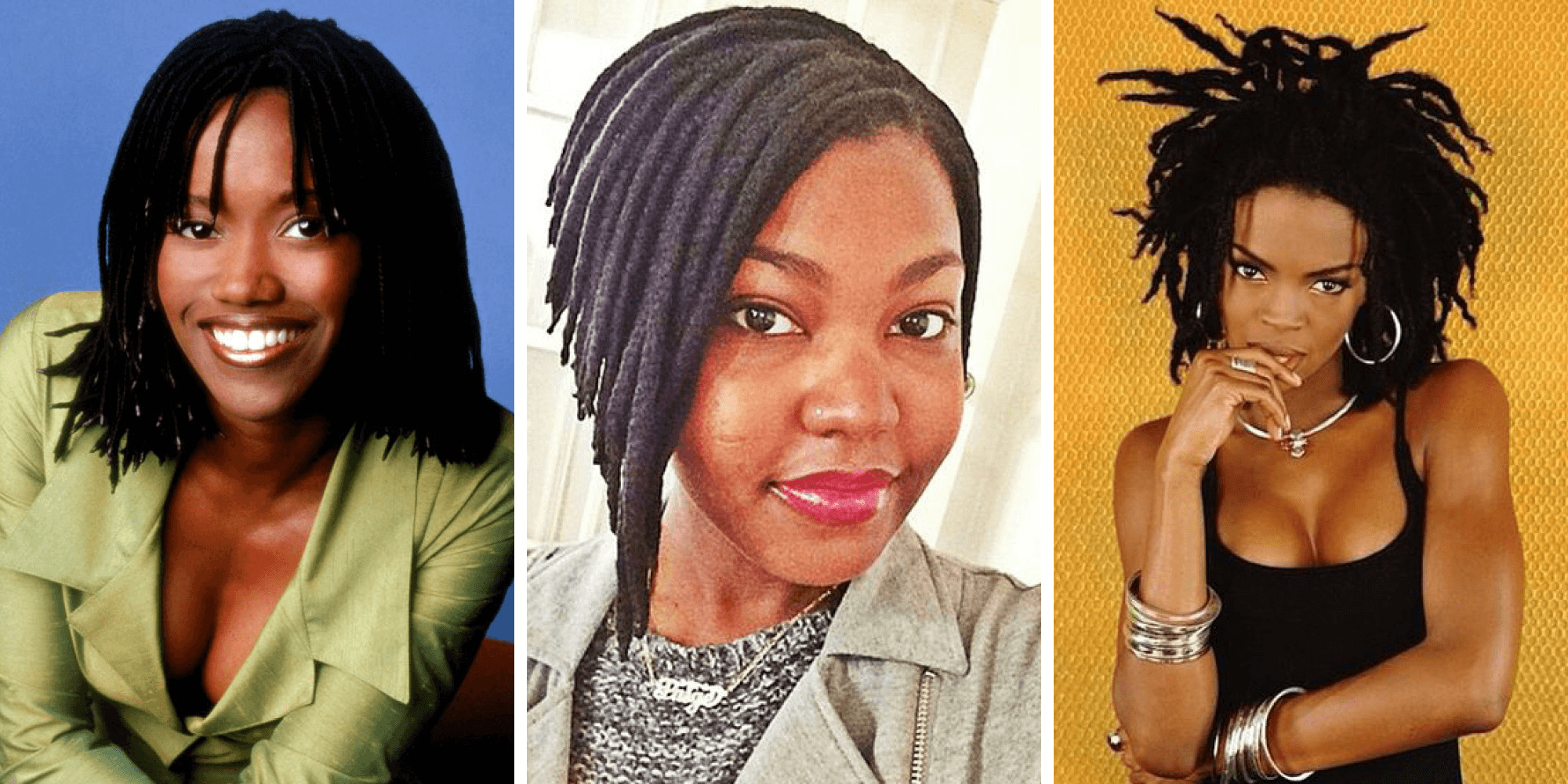 Maxine took the heat at both her job and at home as the successful and lovable lawyer whose wit was unmatched. She wore shoulder length individuals that were jet black, burned at the ends and gorgeous. Twisted bantu knots and pooca shells also made their debut on the character’s crown. Lauryn Hill also served the same looks, and the both of them have inspired styles that are currently trending.

All of these styles can be seen throughout media content in the 90’s whether in music videos or in magazines. And now, they’ve appeared on the heads of today’s celebrities, Youtube influencers and beauty fanatics. The classic styles constantly get repeated because they capture the essence of a time period while also striking as timeless. 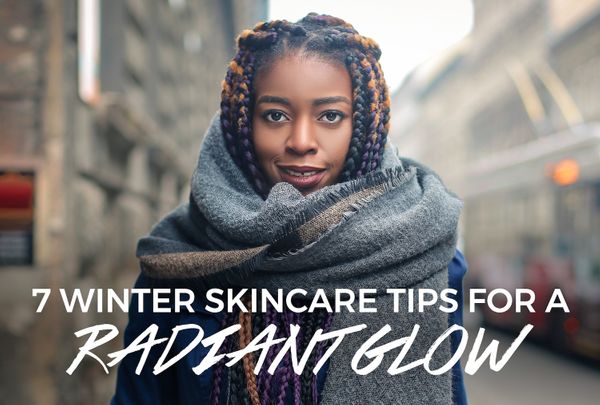 While the winter months are usually the time to get nice & cozy, there is one thing  Your skin! The winter weather can cause havoc on your skin if you 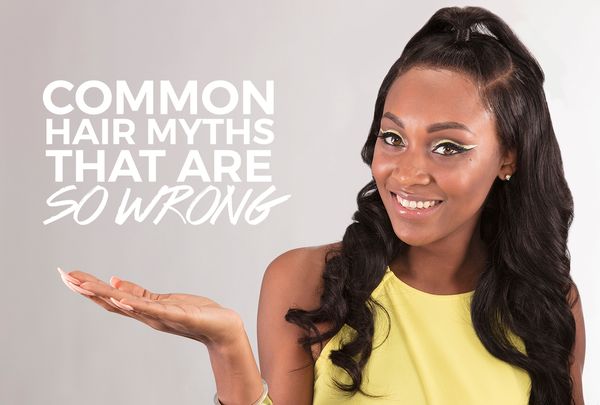 “You need to trim your ends every 6 weeks.” “Braids help protect your hair from damage and your hair will grow faster.” “Go to a hairstylist to get a good