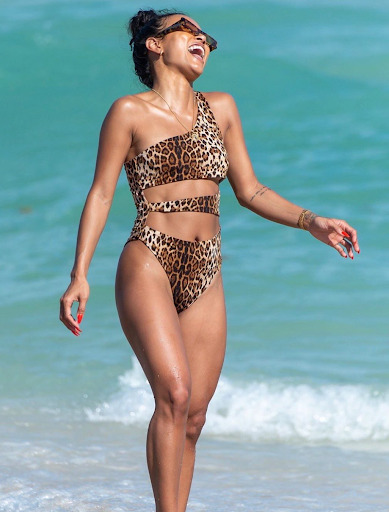 Interested in seeing the results of dropping the wrong man and focusing on one’s self? Well, look no further than Karrueche Tran!
She went from being known as the ride-or-die, on-again-off-again girlfriend of who Charlamagne jokingly refers to as the second coming of Bobby Brown to an actress, model, social media influencer and all around boss babe - proving that putting yourself first allows you to live your best life.
Tran traded in a toxic relationship filled with cheating, disrespect and enough drama that I’m sure had her playing Brandy’s “Brokenhearted” on repeat, for a more toned body, million dollar endorsements and a career of her own. People hardly associate her with her R&B bad boy ex.

This my loves, is what a glow up is all about.

While internet thugs spent their time trolling away at a girl who was thrusted into the spotlight because of whom she chose to date, Tran focused her energy on building herself up. She channeled her frustrations into propelling herself forward as a force to be reckoned with in young black Hollywood.
As a result, she is now sought after for tv and movie roles, serving body goals for the slim thick crew of America, is a CEO of her own companies, and even found love again in a more suitable young gentleman.

Let’s take a look at how Karrueche is winning in career, fitness, and love.

The Artist Formerly Known As Karrueche 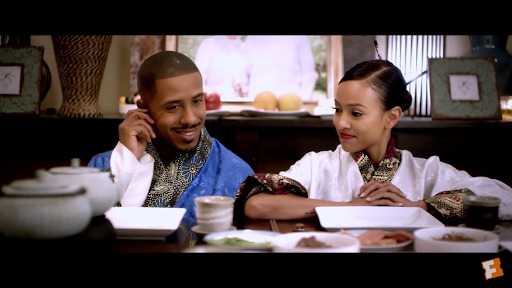 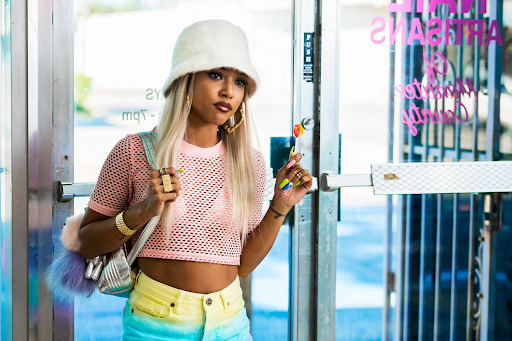 If you would have asked me years ago if I saw acting in Karrueche’s future, the answer would have probably been no. Fashion influencer? Yes. But an Emmy award winning actress? Not necessarily.
However, with natural talent mixed with hard work, Karrueche is an actress in high demand. Interestingly enough, she never saw acting as a career for herself. But, after ending a very public relationship, she knew she had to do something with her platform that didn’t include paid hosting events or sponsored social posts. She told Stylecaster in a 2018 interview: “I hit a point in my life where it was weird. I had a platform. But there really was no substance and quality.” Her manager suggested acting and just like that, her passion was discovered. She admitted that in the beginning, a lot of people did not believe in her. Nevertheless, she persisted! She worked with an acting coach and soon began landing roles. She went from completing a one-line role in the 2014 horror movie “The Fright Night Files” to roles in the winning series “The Bay” and the short-lived web drama “Vanity,” opposite Denise Richards. Her big break came in 2017 when she was casted as “Virginia” in the TNT drama “Claws.” 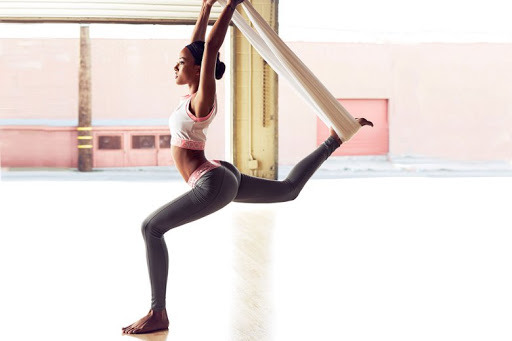 People assume that skinny girls have it super easy. As someone who is naturally thin, I am here to tell you that’s a lie. Our clothes don’t hug our “curves” the way they do others who are shaped like Coca Cola bottles. We get stomach pouches and bloated just like any other girl. We yearn for Janet Jackson-like-abs and a Jennifer Lopez booty too. At 5’1 and 105 lbs, Karrueche Tran was no different.

After getting sick of having a “lil sad booty,” Tran hired a trainer (Mario Guevara) with three major focus areas: abs, butt and overall toning. She likes to switch her workout routine up and is not a fan of diets, admitting that they only last “2-3 days”, so she opts for a balanced diet instead. She even told Glamour in 2017: "Diets don't really work for me. I want to be fit and have some meat on my bones. I stopped eating carbs and red meat for a month and a half, and I was like, 'Oh, no, I lost my butt!' I have to eat potatoes and rice and meat to bulk up. But I do try not to eat too much fast food." 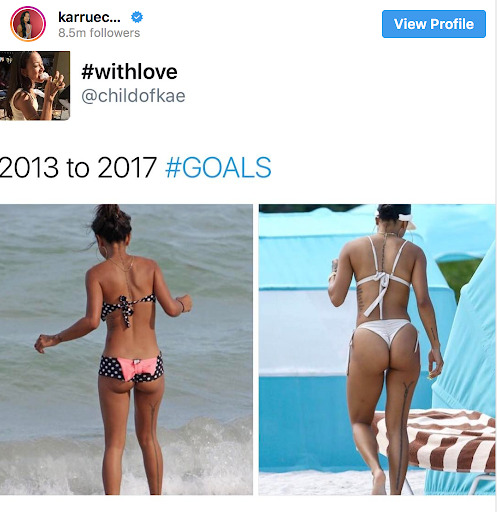 She’s proudly gained her weight and muscle the natural way. As an admitted member of the “itty bitty t-tty committee,” she says that being so slim was always an insecurity of hers. “I wanted to get surgery, but then I was like, ‘What kind of message does that portray of what I’m not comfortable with?'” Tran told Extra TV. “I just decided it was okay to have little boobies and a little booty.” To make her glutes and thighs firm, Tran does lots of lunges and squats and works out on the treadmill to get her heart rate up.
The results are impressive!

The Business of Beauty 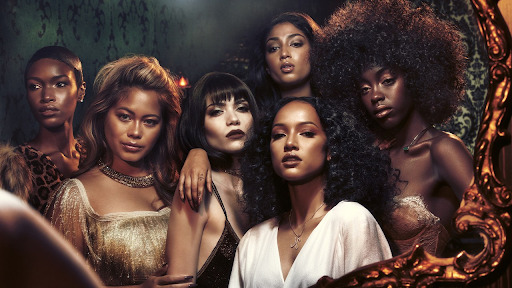 Don’t forget to add Karrueche to the number of black women who have successful makeup collections!
In 2016, Karrueche teamed up with ColourPop for KaePop by Karrueche Tran, a collection of matte eye shadows, lipsticks, lip pencils, blush, highlighter, and a contour bronzer to give you the famous Karrueche glow. Each piece in the collection was under $8 and was an instant hit. 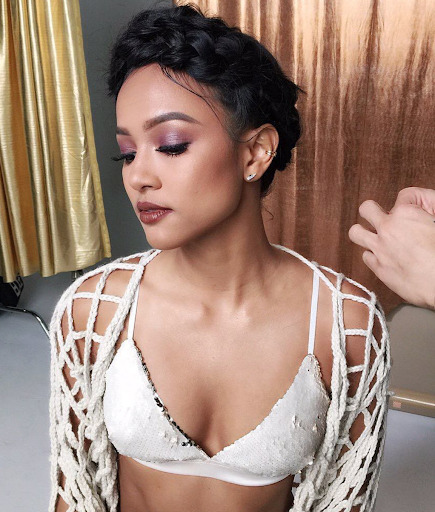 It was so successful that she collaborated with the line again, with her latest “Brown Sugar” collection in 2018. According to a ColourPop rep, Brown Sugar is "inspired by the color brown, which evokes a sense of strength, warmth, and elegance. Designed with all skin tones in mind by incorporating universally flattering shades, this new collection will be sure to give your makeup routine a needed sugar rush."

With Karrueche being of Vietnamese and African-American descent, the collection is an homage to her culture and is a celebration of all brown skin tones. With the lack of variety in beauty products targeted to the African-American demo, Karrueche is doing her part to make sure we all have something to enhance our natural beauty! 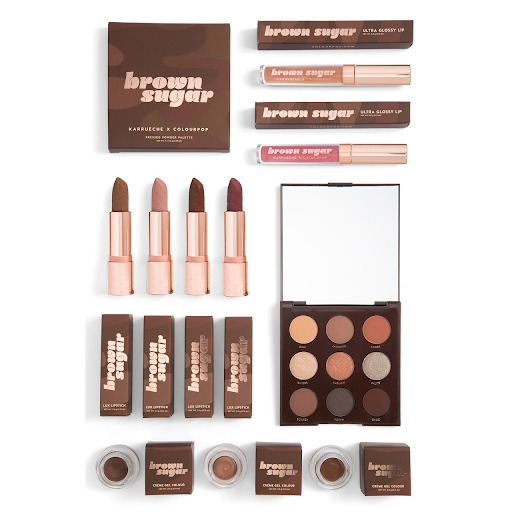 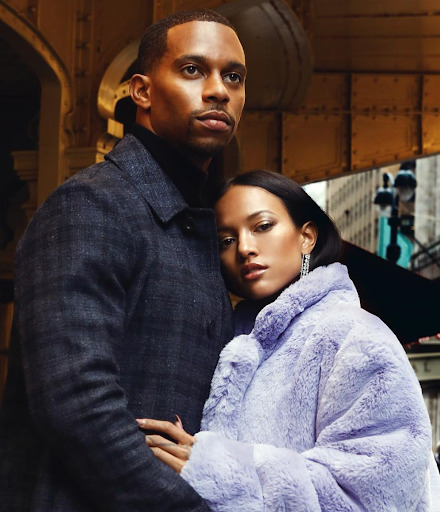 It should only take a woman one bad relationship to learn her lesson...in theory at least. Luckily, it looks as if Karrueche is done with bad boys for good. She’s happily dating football star Victor Cruz, flaunting their love online, on red carpets, and on tropical vacations. After dealing with so much drama in her last relationship, Karrueche told Us Weekly in 2018, “He’s so sweet, like a really nice guy, he’s genuinely kind and it’s so refreshing to be with such a kind, great guy. And it doesn’t hurt that his body is bangin’!”
Victor apparently feels the same, also telling Us Weekly that she is indeed that very special someone he’s been searching for. “She’s very much the one for me. I love her very much,” he said. “We’re still growing and learning things about each other as we’re going along.”

Do I hear wedding bells in the near future?!

I’m proud of Karrueche for all she’s been able to accomplish under constant watch and scrutiny. Glow Karrueche, glow! 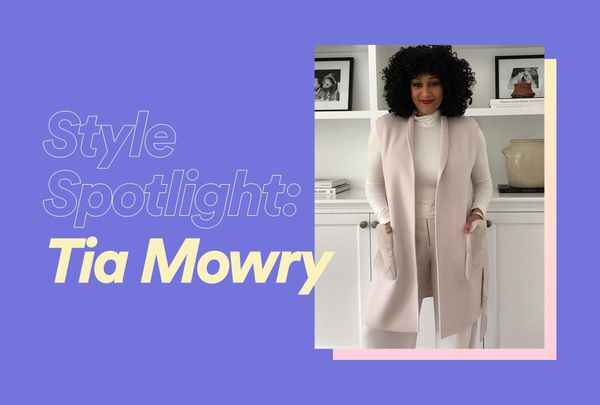 Although she’s an identical twin, Tia Mowry-Hardrict is definitely in a league of her own in terms of personality and style. While her sister Tamera comes off as the 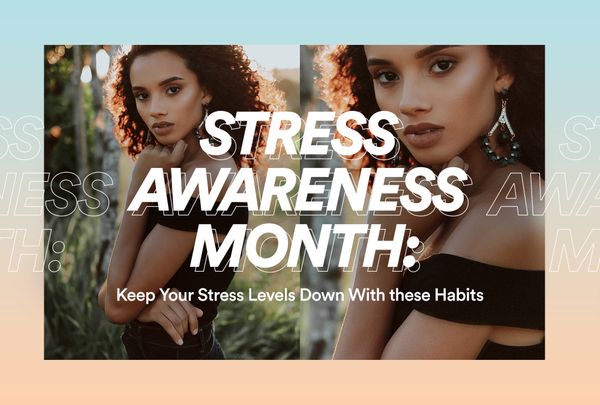 Did you know that April is Stress Awareness Month? It’s nice to know that there’s an official month dedicated to overall wellness and recognizing stress, triggers, and how